In July of 1996, Eric Clapton recorded Change the World for the soundtrack of the movie Phenomenon starring John Travolta and Kyra Sedgwick.

Eric Clapton is the only artist to be inducted into the Rock and Roll Hall of Fame three times: in 1992 as a member of The Yardbirds, in 1993 as a member of Cream, and in 2000 as a solo performer.

Eric’s mother felt she was unable to take care of him so when he was two years old he was taken to his grandparents who raised him. He found out in his 50’s that his real father was a Canadian pilot.

He took up the guitar when he was 14 years old and has said that his major influences were mainly blues artists such as Muddy Waters, B.B. King, Buddy Guy and John Lee Hooker.

Before becoming a successful solo artist, he was a member of The Yardbirds, John Mayall & The Bluesbreakers, Cream, Blind Faith, Delaney & Bonnie & Friends, and Derek & The Dominos, all very successful bands in their own right.

He has achieved many ‘firsts’ in his stellar career, including having the unique distinction of being the only non-Beatle to play on a Beatle’s song when he recorded the guitar solo on “While My Guitar Gently Weeps”.

My high school rock band Black Magic performed Sunshine of Your Love by Eric’s first band, Cream. The legend goes that singer and bass player of Cream, Jack Bruce, based the riff on a bassline he heard while attending a Jimi Hendrix concert. Jimi would often perform that song as a tribute to Cream, not knowing the song was actually inspired by him.

Eric’s autobiography is full of crazy stories and outlines a most incredible, sometimes tragic life. It’s hard to put down, if you haven’t read it I highly recommend it. 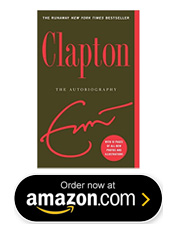 Slowhand at 70: Live From The Royal Albert Hall 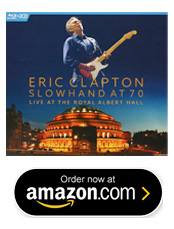