In 1979, Ozzy Osbourne, Randy Rhoads and company were in the studio recording new songs, the first of which was Goodbye to Romance.

According to Ozzy, this song was his way of saying goodbye to his former band, Black Sabbath, as he thought his music career was over.

Born on December 3rd, 1948, Ozzy Osbourne was born the son of blue collar parents in Birmingham, England. He has three older sisters and two younger brothers.

Although he had been in a couple of short lived acts previously, for all intents and purposes (note I didn’t say for all intensive purposes) his music career began as vocalist for the band Black Sabbath in the late 1960’s.

I was a fan since before I started playing guitar, and count Randy Rhoads as one of my primary influences as a guitarist. One of my favourite songs of all time is Mr. Crowley. I have, however, enjoyed listening to and attending concerts with all of Ozzy’s guitarists over the years including Zakk Wylde, Jake. E. Lee and Gus G.

After Ozzy was fired from Black Sabbath due to drug and alcohol problems, he was signed by Don Arden (his current wife Sharon’s father) to Jet Records, despite not having any new material or plans.

Although the project was supposed to be a band called Blizzard of Ozz, when the album was released the album artwork had Ozzy’s name in larger print than the band name, which made it look like an Ozzy Osbourne album called Blizzard of Ozz, rather than a self titled album of the same name.  This accidentally sparked Ozzy’s solo career and like anything about Ozzy, has rumours and a certain degree of controversy surrounding it, but that’s a tale for another time.

Regarded as the personification of rock and roll excess for some five decades now, the road stories about him are the stuff of legend. That he lived to tell is the biggest mystery. The music industry has changed so much that one could say the self proclaimed Prince of Darkness has had, and continues to have, a “once in a universe” career and story. His latest album, Ordinary Man features a less heavy metal side of his musical tastes and includes a duet with Elton John.

Osbourne has since reunited with Black Sabbath on several occasions including the farewell world tour which culminated in a final performance in their home city, Birmingham, England, in February 2017. His longevity and success have earned him the informal title of “Godfather of Metal”.

In his career Ozzy has sold over 100 million albums, has been inducted into the Rock and Roll Hall of Fame, has won two Grammys and various lifetime achievement awards including the Classic Rock and Roll of Honour Living Legend award.  He considers his journey to sobriety his greatest accomplishment. 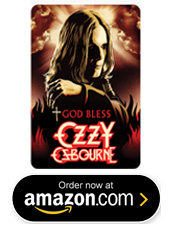 I Am Ozzy (Autobiography) 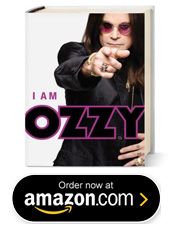 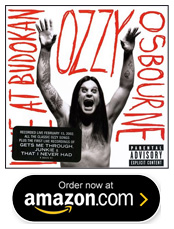