In 1962 Patsy Cline had a hit with “Crazy”, a song written by Willie Nelson.

Although she was already famous, the song resonated with music listeners the world over and her stardom rose to galactic proportions.

Born on September 8, 1932, Patsy Cline was one of the first country music artists to successfully cross over into pop music stardom.

She is considered one of the most influential vocalists of the 20th century  and had two number one hits in her eight year recording career.  The one she is most famous for, however only reached number two in 1962.

Willie Nelson had written several hit songs for other country recording artist’s but he really wanted to have a hit of his own. He first shopped this song to a couple of popular male country stars of the time but they both turned it down, citing it was “a girl’s song.”

The original title of the song was “Stupid”, according to Willie, but after performing it and getting audience reaction changed it to “Crazy.”

Apparently Patsy hated the song when she first heard it, primarily because the vocal on the demo Willie recorded was more spoken than sang, and she said she couldn’t sing like that. Her producer at the time loved the song though and arranged it in the ballad form that came to be the version we all know and love.

It spent 21 weeks on the charts and became one of Patsy’s signature songs. When she performed it for the first time at the Grand Ole Opry (on crutches apparently) she received three standing ovations.

The Amusement and Music Operators Association named “Crazy” the most played jukebox song of all time. It has been recorded by other artists including Dottie West, Ray Price, Crystal Gayle, LeAnn Rimes and Willie Nelson himself.

Willie has stated that of all the recordings, Patsy’s is his favourite because it was “a lot of magic”.

Me and Patsy by Loretta Lynn 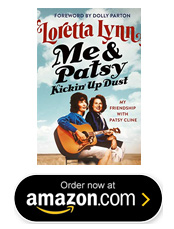